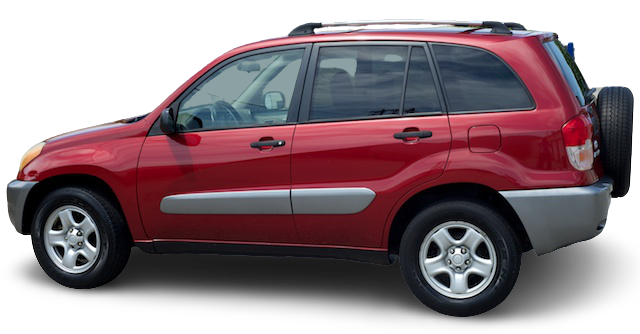 RAV4 stands for a 4-Wheel Recreational Active Vehicle and is available in all-wheel or front-wheel drive. This automobile rides on a four-cylinder engine with a car-based platform and a 5-speed manual or an automatic 4-speed transmission. It has a unique feature of the AWD full-time system, which has a limited-slip center differential, to mean it is always on. Most compact and modern SUVs have an on-demand AWD with a front bias, while the rear axle engages only when necessary.

The RAV4’s interior is comfortable and relatively spacious. It has a high driving position that offers perfect all-round visibility, thus fun to drive. Its controls are easy to use and conveniently located. This automobile has an excellent finish and is well fitted. Its rare-swing door glass doesn’t open separately. However, its low cargo floor eases the loading process but has small cargo space.

Generally, the RAV4 is a good quality SUV, although it has several problems that require addressing. Such problems include:

The NHTSA has received numerous complaints concerning the transmission issues of the 2003 Toyota RAV4 model.  The blame is primarily on its engine control module that instructs the transmission. Issues with automatic transmission shifts need immediate attention before the problem worsens.

NHTSA’s recall will require the vehicle owner to present receipts and other accompanying documents for car repair to be done cost-free.

Toyota recalled close to three million RAV4s over the rear seat belts issue since they can detach when a crash happens, thus can kill passengers. It is vital to have the seat belts adequately checked, especially for those car buyers considering the option of a used 2003 Toyota RAV4 vehicle.

Turning on of the check engine lights to the Toyota RAV4 means that the O2 sensors are defective and require immediate replacement. This component of the engine measures the quantity of unburned oxygen present in the exhaust system. If you do not replace the engine light, it may result in a damaged catalytic converter, extra fuel burn, lesser fuel-economy ratings, and spoiled spark plugs.

A blown head gasket is often a result of an overheated hood, depleted coolant levels with no leakage trace, and external coolant leaks beneath the exhaust gasket. For the head gasket to last longer, it is essential to frequently check on the cooling and engine system.

The oil needs changing after every 3,000-mile coverage. You will need to plan for the maintenance or replacement of its oxygen sensor system and the timing chain as it often experiences problems after 60,000 gas mileage.

The 2003 Toyota RAV4 allows noise from outside to penetrate, causing discomfort to both the passengers and driver, especially in windy conditions. Road noise is often uncomfortable, therefore essential to take a test drive before purchase.

The skylight seal often shrinks with age as a result of the leaks it experiences. There is no available replacement from Toyota dealers for the skylight seal; however, if you notice any problem consult your dealership on how best to fix the issue.

2003 Toyota RAV4 produces a squeaky rattling sound from the loosely cracked seals that have been weather-stripped due to aging. While driving, the wind noise still manages to penetrate the vehicle. Its small size limits the number of passengers that can occupy the car. Its exterior paint peels off, making it look unappealing aesthetically.

A faulty Engine Control Module may result in a problem with the shifting of the automatic transmission. This issue requires replacing the Engine Control Module to address issues such as loss of power, harsh shifting, shifting gears, and slamming into gear when in reverse. Leaking of the engine valve seal may result in a grey or blue smoke for a start.

The air-to-fuel ratio sensor might fail, causing the Check Engine Light with a P1155 code. A replacement of the air-fuel ratio sensor is essential and labor costs sums up to around $115- $470. The mass airflow sensor may get dirty, resulting in acceleration hesitation. A worn-out steering rack causes clunky noise in the steering and requires replacement that costs around $600.

The RAV4 is considered a rare and small SUV with full-time AWD. Though it has limited cargo space, the rooftop carrier compliments it here. It has a good engine with low maintenance costs compared to other SUVs. However, you can lower the repair cost by installing a genuine Engine Control Module (ECM) which will detect problems in their early stages.

Despite the problems outlined above, the 2003 Toyota RAV4 has a high-reliability score considering its age. Luckily, lemon law covers most of these problems.  Its main competitors include the Honda CR-V and the Subaru Forester.

The RAV4 has experienced transmission failure over a long period. RAV4 owners have launched several complaints as they have a problem of lurching or hesitating when at slow speed, while at times, it is slipping out gear.

Toyota is notable for being among the most long-lasting and dependable road-worthy vehicles; thus, the RAV4 is not an exception. To be more precise, the RAV4’s DNA has reliability engraved all over it. The high sales experienced by Toyota on the RAV4, attributed to its good reputation in the market, makes it a highly reliable car compared to its competitors. Hence most of the owners recommend this car.

Several factors affect the car value of a 2003 Toyota RAV4. These factors include the trim level, mileage, options, condition level, among others. Generally, used 2003 Toyota RAV4s have a price range of between $889- $3,232. Identifying these factors and exercising vigilance when conducting car research will enable you to purchase a quality car worth your budget.